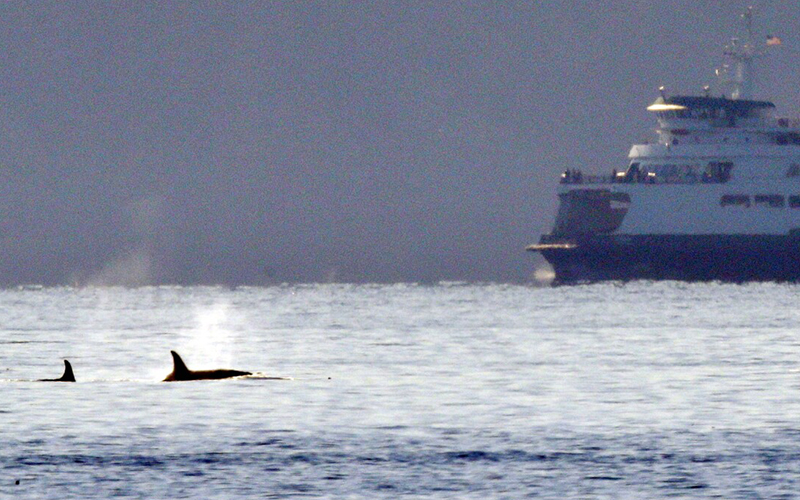 A pair of orca whales swim in view of a state ferry crossing from Bainbridge Island toward Seattle in the Puget Sound on Oct. 29, 2013. A new University of Washington study of underwater noise finds that killer whales are bothered more by a fast boat than a large one or by a number of them in close proximity.

Underwater noise from vessel traffic is one of the key threats to Puget Sound’s endangered orca population. It interferes with the killer whales’ ability to find increasingly scarce salmon. A new initiative is underway to alert ship operators when whales are near so they can slow down.

A recommendation from Gov. Jay Inslee’s Orca Recovery Task Force led to the creation of Quiet Sound. The program — part of the Port of Seattle-funded nonprofit Maritime Blue — is working to expand voluntary participation in a whale report alert system that’s already used in Canada and by Washington State Ferries. It’s an app that can be used on a smartphone or a desktop computer.

“That can let a pilot know if there is a fresh whale sighting within 10 nautical miles of them,” says Rachel Aronson, Quiet Sound’s newly appointed program director.

“And at that point, the pilot or the master of the vessel can choose to take a protective measure,” such as slowing down or changing course. She says when large vessels slow down to 11-14 knots, it reduces the underwater noise they create by about 50 percent.

“So for a relatively minimal slowdown, there’s a pretty big noise benefit,” she says.

It not only lessens the interference with the whale’s ability to hunt, but it also reduces stress — all of which scientists say could help with reproductive success and longevity of the endangered whales’ population, which now number just 73.

Aronson is working to establish voluntary slow-down zones in areas of Puget Sound that are frequented by whales. Quiet Sound will be taking input from representatives in commercial shipping and maritime transportation next month to plan a trial of the system.

She says that kind of inclusive planning has been a key to the success of Canada’s ECHO program, which started about five years ago and claims participation rates of 80-90 percent from commercial vessels in busy Port of Vancouver waters.

The U.S. Navy is also partnering with Quiet Sound as it looks for new technologies to help keep oceans safe for marine mammals. A new U.S. Navy challenge calls on entrepreneurs and inventors everywhere to develop a device that can autonomously detect the presence of southern resident orcas in Puget Sound and Northern Atlantic right whales on the East Coast.

The winning designers will be awarded up to $75,000 dollars. The challenge is specifically for devices that would attach to unmanned vessels, which are expected to proliferate over the next decade.

“I mean, protecting the marine mammals, being able to navigate in accordance with the rules of the road and Coast Guard regulations and the state regulations — if we don’t do it, then these systems, they won’t deploy,” says Johannes Schonberg, director of engagement with the U.S. Navy Lab in Keyport.

Schonberg says the Navy has very strict protocols that protect marine mammals; those include having human lookouts on every ship. New technology needs to meet or exceed those standards.

Data from the Navy could also ultimately flow into the current whale alert system, though he predicts at some point newer technology will replace it.

Quiet Sound is also working with a number of nonprofits who have developed their own whale-detection systems over the years, such as Whidbey Island-based Orca Network. Co-founder Susan Berta says work and “fine tuning” are underway to allow the Whale Alert App to accept reports from their network.

Quiet Sound’s Aronson says it’s one of several systems that already use networked hydrophones and other technology to raise awareness for the whales and their specific whereabouts. What’s missing is a central convener.

“In a lot of ways, the pieces of the puzzle — a lot of those pieces were out there. But there was no one place that brought them all together,” she says.

It may take a couple of years to get there, Aronson says, but Quiet Sound wants to be the solution.