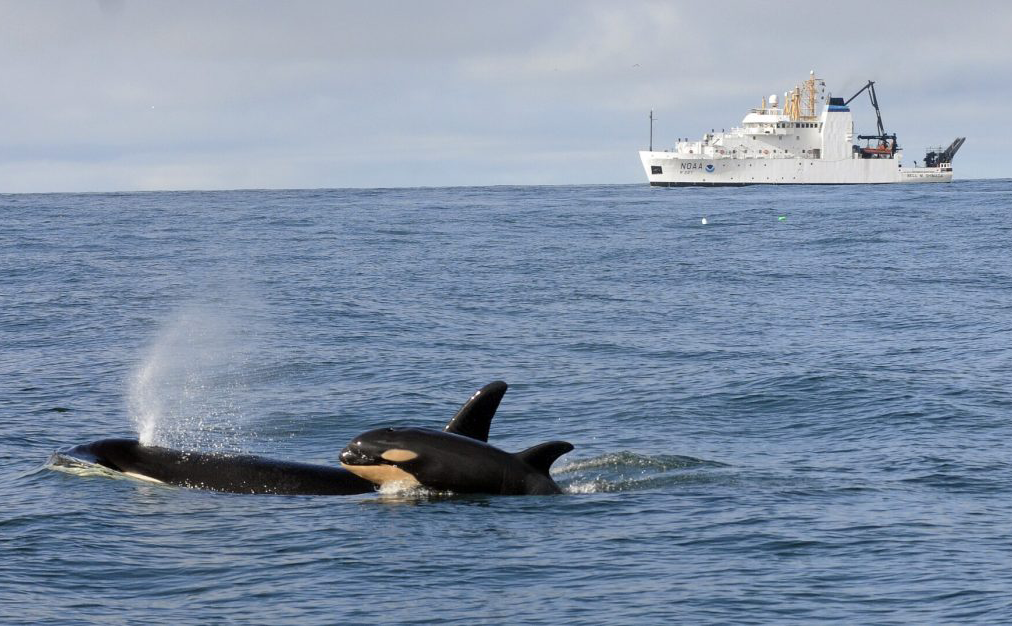 In this photo taken in February 2015 by NOAA Fisheries, newborn orca calf L-121 swims with its mother, L-94, off Westport, with the NOAA research ship Bell M. Shimada in the background. Young orcas often do not survive past their first year of life.

Underwater noise from ship traffic is one of the major threats to Puget Sound’s endangered Southern Resident orcas. It can interfere with the whales’ ability to communicate, navigate by echolocation and find the increasingly scarce salmon they prefer.

A recommendation from the orca recovery task force convened by Gov. Jay Inslee in 2018-19 is to reduce noise and disturbance from large vessels. Work is underway to develop a program called “Quiet Sound,” which will alert ships to the presence of whales so they can re-route or slow down.

It’s modeled after a program in British Columbia, called Echo. It’s voluntary, but used by most ship captains on their smartphones.

“The app is in the pockets of a lot of the mariners already,” said Seattle Port Comissioner Fred Felleman. He’s been pushing to get Quiet Sound up and running as soon as possible, because it’s especially needed at this time of year, when orcas follow salmon in to busier parts of Puget Sound.

“This is when the whales are in town and we have two new babies already born: J-57 and -58. And J-46 is about to give birth,” Felleman said. “So this is when we really want to be as protective as we can.”

The ports of Seattle and Tacoma have contributed $100,000 to get the program started. They estimate they need to raise another $400,000 to staff up and make the program fully operational.

John McCarthy is president of the Port of Tacoma Commission and co-chair of the Northwest Seaport Alliance. He spoke during a recent webinar on the status of Quiet Sound.

“While Echo has been a success and a model for us to consider, we have the opportunity to adapt and make sure we’re doing what’s right for the Puget Sound in Washington state,” McCarthy said.

Like Echo, Quiet Sound will be completely voluntary. And it will use the same smartphone app to communicate with mariners. But the sources of sighting data that feeds into it will be different, and the recommended speeds and detours near whales would be adjusted to local conditions and regulations.

The ports of Seattle and Tacoma say they have provided the startup funding. But, given the urgency around protecting the small population of Southern Resident orcas that remains, they’re hoping contributions from state, federal and private sources will make up the difference as soon as possible.

The latest official count of Southern Resident killer whales from the Center for Whale Research puts their number at 74, including the two recently born calves.