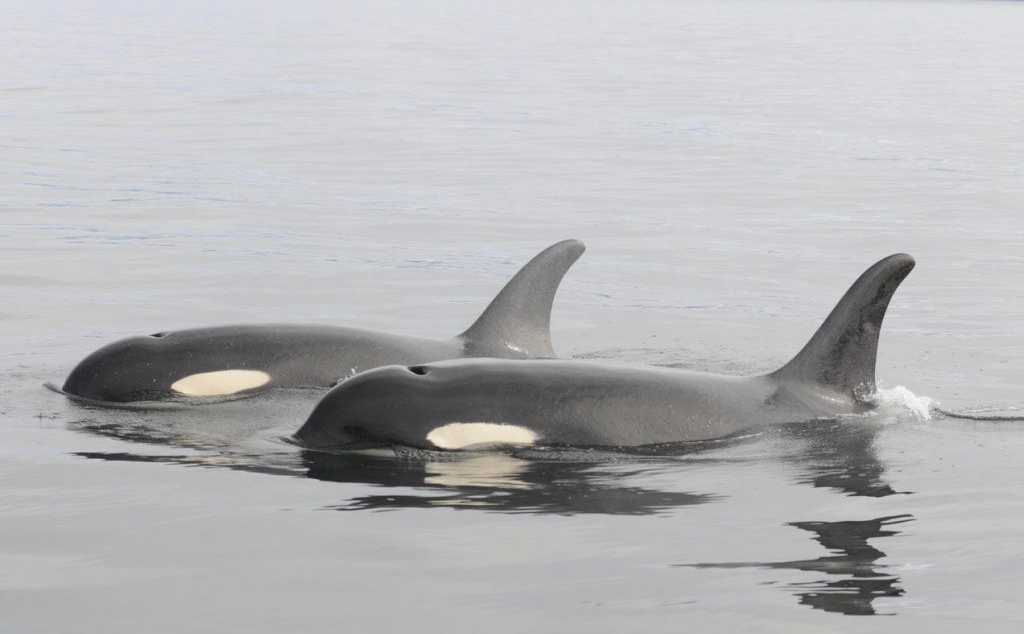 The Washington State legislature this weekend approved a state budget that funds an innovative new program aimed at reducing ship noise and disturbance in the Salish Sea to benefit endangered Southern Resident orcas. The program, known as Quiet Sound, is the first of its kind in the United States. Underwater noise from ships is a global problem, but one that is particularly acute in Puget Sound, as the noisy waters make it hard for starving orcas to hunt and find food.

Quiet Sound will expand the system that alerts mariners to the presence of orcas so they can adjust their route or slow down, and it will examine options to adjust vessel operations in ways that reduce the underwater noise from large commercial vessels in Washington’s waters. Small changes in speed or direction by vessels could prevent a deadly collision with an orca and will reduce acoustic disturbance. Quiet Sound will also work to identify innovative technologies to lessen radiated noise from ships and employ underwater acoustic listening stations to track whales and to measure how underwater noise is changing.

As Nora Nickum, Ocean Policy Manager for the Seattle Aquarium, and I wrote in a recent Seattle Times op-ed, orcas use sound to hunt. Underwater noise from the myriad vessels traversing the Salish Sea disrupt orca’s ability to successfully find their preferred prey, Chinook salmon. At present, most stocks of Chinook in the region are low in number and in decline, meaning orcas already expend a lot of time and energy hunting for their scarce food source. A study commissioned by the Port of Vancouver noted that a Southern Resident orca potentially loses up to 5 ½ hours of foraging time per day from May through September due to vessel noise and disturbance from commercial vessels and whale-watch boats.

By reducing underwater noise levels, Quiet Sound will play an important role in helping hungry orca whales find fish. A scientific analysis conducted in 2017 found that reducing acoustic disturbance by 50% combined with increasing Chinook salmon stocks by 15% would put the declining orca population on a growth trajectory. While more needs to be done to recover Chinook salmon throughout the orca’s range—including restoring key salmon habitat in the Columbia River Basin by breaching the four lower Snake River dams and replacing their energy with clean alternatives—Quiet Sound is an important step forward to lowering the volume in the orca’s primary summer feeding grounds.

Quiet Sound is inspired by the Vancouver Fraser Port Authority-led ECHO program, a vessel quieting program established in 2014 on the Canadian side of the Salish Sea that is already showing impressive results. In 2019, 82% of large commercial ships participated in voluntary ship slowdowns, reducing their speeds to as slow as 11.5 knots. Scientists used underwater microphones (called hydrophones) to determine that these slowdowns reduced underwater noise by half. Captains also agreed to shift ship routes to avoid key orca foraging areas when the whales were present. Furthermore, the Port authority offers financial incentives to help shipowners retrofit noisy ships with technologies or quiet notations that reduce the vessel’s noise footprint.

Encouraged by the success of the ECHO program, and following on recommendations from the Orca Recovery Task Force, the Port of Seattle, led by Commissioner Fred Felleman, convened a workshop in 2019 bringing together state and federal agencies, tribes, industry, conservation groups and others to discuss if a similar approach could work for Washington, and it was from this convening that Quiet Sound was born. The Ports of Seattle, Tacoma and the Northwest Seaport Alliance committed initial start-up funds to the effort, which allowed for stakeholders to continue to work together to develop the program’s mission and architecture.

NRDC is grateful to Senator Liz Lovelett and Representative Debra Lekanoff, who led budget provisos to add funding for Quiet Sound to the state budget. Senator Christine Rolfes, Chair of the Ways and Means Committee, included the funding in the Senate budget, and led efforts to ensure it stayed in the final biennium budget. This leadership is critical in our collective effort to prevent the extinction of the Southern Resident orca population.

With state funding now secured, the Quiet Sound program partners should get to work without delay and operate in a manner that is transparent and inclusive of all interests.

Time is of the essence. While three new orca calves joined the population over the last year, their survival is predicated on the ability of their mothers to find food. And new research indicates that mother orcas are the most vulnerable to vessel disturbance. Quiet Sound must urgently act to reduce vessel noise and disturbance. We should all credit the Washington State legislators for making sure they have the means to do so.