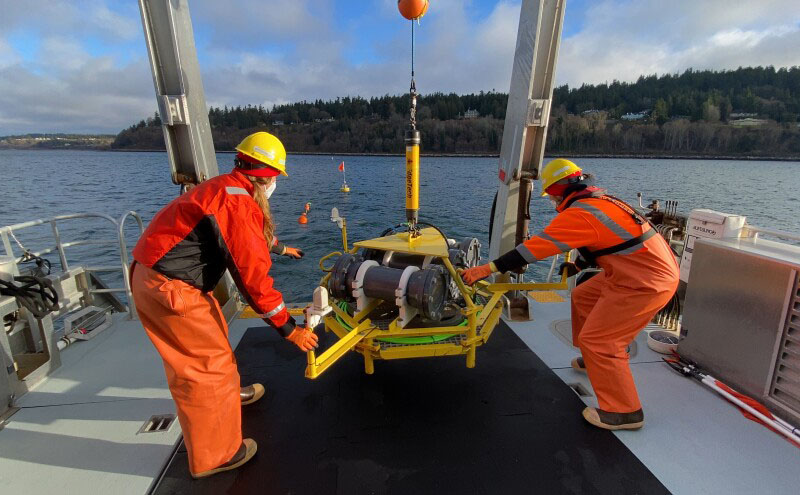 SEATTLE – Scientists aboard the King County research vessel ‘SoundGuardian’ Tuesday deployed a buoy that will monitor underwater noise in Puget Sound – which poses risks to our southern resident orca population.

Orcas frequent the Sound during the winter to hunt chinook and chum salmon. The whales navigate the water and hunt using echolocation, which is where they make sounds and detect how quickly they bounce back, allowing them to judge how far away objects and prey are.

The buoy technology was developed by SMRU Consulting, based out of the University of St. Andrews in Scotland. The organization is conducting similar research around the world, including the ECHO Program in British Columbia.

The SoundGuardian deployed the buoy, which allows SMRU Consulting to put together reports of orca sightings, which pilots of large vessels can use to determine if they need to slow down or change course, so they will not disrupt orcas.

“We’re grateful to King County for making the SoundGuardian available for this effort,” said SMRU Consulting managing director Jason Wood. “We hope the data generated by this pilot study will help inform long-standing recovery efforts by organizations such as NOAA, Quiet Sound, Orca Network, OrcaSound, the Whale Museum, OceanWise and others.”

This research supports the Quiet Sound Program created by the Southern Resident Orca Task Force in 2018. One of their primary objectives is to cut down the underwater noise from ships and ferries near orca populations.

“Our state-of-the-art research vessel is a valuable asset helping some of the world’s leading marine biologists work to protect southern resident orcas,” said King County Executive Dow Constantine. “The scientific research they produce will contribute to our collective mission to not only track the health of Puget Sound, but also ensure the survival of its marine life.”